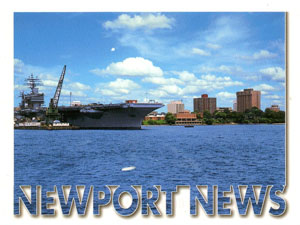 Newport News is currently one of the top five most populated cities in Virginia with roughly 184,000 residents. A large percentage of people here are employed by the military to one extent or another thanks to Newport News Shipbuilding, Joint Base Langley-Eustis and other bases and suppliers. L-3 Flight International Aviation and Ferguson Enterprises are also headquartered here.

Speaking of the Army, you may be surprised to know that their current practices were influenced to some degree by a quality control system invented by Motorola in the mid-80s.

Known as Six Sigma, this protocol was originally designed to help with their manufacturing practices. Motorola was so bent on perfection, they wouldn’t accept anything more than 3.4 defects for every one million units. While this strategy definitely worked, it wasn’t until the mid-90s that Six Sigma gained mainstream appeal. That’s when Jack Welch implemented it as the main business strategy at GE. Obviously, neither company has done poorly.

Now, thanks to Six Sigma certification in Newport News, Virginia, your company can also benefit from this phenomenal strategy. You’ll learn how to approach the systems and business concepts you’ve long relied on with an eye for finding possible flaws. Even seemingly minor ones may be costing your business when it comes to revenue, customers and business partners. Some may prove to be your Achilles heel.

Six Sigma certification in Newport News, Virginia will also help improve your employees, an essential resource you can’t afford to underutilize. Employees will be taught to work with the same critical eye so they can identify issues with their day-to-day routines. They’ll also learn how things like SMART goals can help them contribute more as individuals. Again, though Six Sigma was originally about manufacturing products, it can now help your staff better understand how they’re using their time and how to do so more efficiently.

Many companies have reported that these simple changes have also helped to boost employee morale. Another reason employees love Six Sigma certification in Newport News, Virginia is because they understand how good it looks on their résumés.

If companies like General Electric, Dell, Amazon.com, Raytheon and 3M can find uses for Six Sigma, chances are yours can too. Successful implementation practices are built into the program, so don’t worry that Six Sigma certification in Newport News, Virginia is going to mean putting your business on hold for the foreseeable future. It will, however, mean a brighter future for your business.